Using puppets for online English-teaching, for example with Zoom or Skype

It’s a great combination!  First of all, for the students it looks like they’re watching television, so it’s very appealing visually. Secondly, because the students can’t see you manipulating the puppet, it really does look as if the puppet is alive.

I’ve been using puppets (especially the elves) for the last 10 years in my Cyber-Santa performances: https://www.bat-i-burrillo.com/shows.  They’ve always gone down well, especially with the younger learners.  This is probably partly due to the fact that you’re adding another character, which always stimulates interest.  It also gives you, the teacher, a chance to have a rest!  The puppet can move around, sing, dance, jump up and down instead of you!

If your puppet can pick things up (like flashcards or realia), then that’s even better. It sounds silly when I try to explain it, but when puppets do ‘human’ activities, it’s the most fascinating thing. Suddenly an everyday activity, like using a mobile phone, becomes captivating! 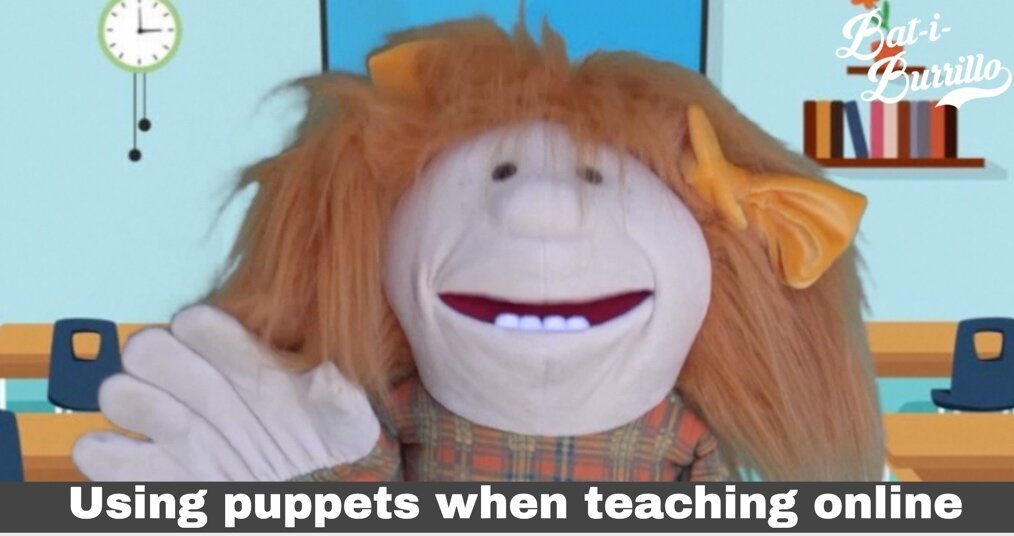 Another thing to keep in mind is how easy or difficult the puppet is to put on and take off.  You don’t want to waste time fumbling around with it.   That’s not a good look, and students can quickly lose interest.

Conversely, keeping the puppet on screen while you’re doing something else is a great way of maintaining interest.  It also gives the kids time to have a good look at the puppet character.  So it’s a good idea to have some sort of support for it, to enable you to have both your hands free at times.  This can be something as simple as a cup, or a can of baked beans!  (Avoid using glasses, as they can easily break.)

There are two main ways to use the puppets.  One is for the puppet to be the protagonist who talks directly to the class while you’re hidden from view.  This works well for ‘people puppets’, especially the living puppets (the ones like Tommy) who have movable hands and can write and point to things.  Of course, you can also be on screen with the big puppet.  If you hide slightly behind it, when the puppet speaks the students won’t realise that it’s the teacher who’s talking.

Another way is for both you and the puppet to be on screen at the same time.  This works really well with animal puppets and/or puppets who don’t have a voice.  The puppet can whisper in your ear, and you can relay their messages.  Again, using puppets for online English-teaching makes it much more interesting for the students to watch and engage with the lesson.

We’ll soon be posting something on our YouTube channel to give you a better idea of what we mean.

Scavenger hunts have become a real staple of online English-teaching, and rightly so.  It’s always good to have a change of focus and get students up and moving, whatever age they are.  And, of course, when students are at home they’ve got access to many more (and more interesting) objects.  But this activity becomes a lot more fun when the students are competing with a puppet!  Make sure you’ve made a list of what you’re going to ask the children to find.  And make doubly sure you’ve got everything to hand that the puppet will need for the hunt.  Include some silly things that the puppet will get wrong.  For example, tell everyone to find a hat, then bring your puppet back on screen with pants on its head!  We’ve found it’s easy – as teachers – to get carried away in this game, so remember to let the children win sometimes …!

When my students are getting too excited, I sometimes mirror what they’re doing with my puppet.  Usually it’s Manu the monkey who’s squeaking and moving about, so I say ‘Are you paying attention, Manu?’  Or ‘Calm down, Manu!’  In this way, I’m indirectly saying the same thing to the students.  Manu calms down and I say ‘Well done Manu, that’s what I like to see!’  And once the puppet’s modelled some good behaviour, remember to praise it.

As I’ve mentioned in previous posts, make sure you have your puppets ‘grounded’.  That’s to say, don’t have them floating in the air (like Mr Hat in South Park!).  Sit them in your hand, on your arm or at table-level, so as to give the effect that they’re sitting or walking on the table.  This is actually much easier to do online, as when you’re using Zoom the thumbnail video gives you a student’s-eye view of what’s happening.